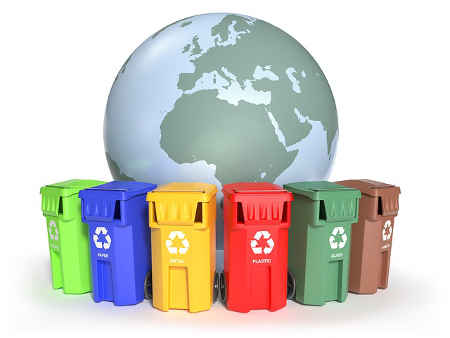 The only way is to recycle

According to the recently published data, British households threw 22 million tons of waste just in 2018. This number compared with the filling up dump sites, is alarming. Even though China was willing to import any amount of rubbish to recycle, they have recently decided not to accept low quality material any more. For this and for many more reasons, recycling has never been as important as it is now. Therefore, we will try to explain what recycling is; what its challenges are and last but not least we will mention house clearance companies as an example of good recycling practice.

It is common knowledge that recycling is a process of obtaining new materials from waste or converting them into new objects. Basically, instead of being kept on the landfill, rubbish is transformed and reused. It is worth mentioning that reusable waste falls under one of the following categories: glass, paper, plastic, tires, textiles, or electronics. Because of that, recycling is strictly connected with the process known as waste sorting, which usually takes place in the households.

The main and ideal premise behind recycling is the production of new materials and products out of waste. This process starts at the place where rubbish is generated, by collecting and sorting it. The policy of rubbish sorting differs across the boroughs and depends on the companies providing waste collection service, but there is a common practice to provide the users with 4 different collection categories (plastic, glass, paper, and biodegradable waste). When it comes to textiles, they are usually collected by organizations such as the Salvation Army, which later on send over collected clothes to be reused or recycled. Electrical items, on the other hand, are often collected by local authorities or at the retailers.

How challenging it is?

One might ask: “What might go wrong with recycling?”. It is pure logic, you’ve got rubbish, you transform it, and you’ve got another thing to use. End of the story. It looks perfect on paper but putting it into practice verifies this seemingly seamless process very quickly. There are plenty of challenges ahead of recycling, starting with mentality, via waste classification and technology.

Mentality can be the biggest problem to overcome when introducing recycling regulations. People generally are used to a certain way of living and introducing new habits in everyday life can be a tall order. Everyone who lost weight knows how difficult it was to resign from the food they were used to and replacing it with healthy options. The problem with rubbish collection is similar – to deal with it we need to stop throwing everything into one bin, so replace one habit with another. It really takes time and effort first of all. What is more, people need to understand why they should be doing this, which is not that obvious they will accept. Therefore, the authorities are introducing some legal regulations to make people feel the direct impact of waste collection on their lives. The arguments of greater good of the whole planet, though true, often don’t speak to people’s sensitivity as they cannot link them directly to their lives.

What to sort and what not to sort?

Another big problem for residents and companies collecting waste is the classification of the collected rubbish and the way it should be processed before sorting. “Is this paper or plastic?” – this question has probably crossed the mind of everyone who was trying to dispose of the juice container. Or: “where shall I throw in this can?” Companies dealing with waste collection try to specify what sort of rubbish fits in to the specific container, but some cases are still arguable. What is more, people are often misled when it comes to the way they should prepare the rubbish before throwing them away. Not everyone knows that paper that is greasy or wet often doesn’t qualify as a reusable material. In addition, it can contaminate the rest of the bin’s contents so that it is no longer eligible for reusing. Another important question is whether one should clean the packages before putting them into the bin or not. The answer to this question is again ambiguous: you can, but you don’t need to. It is recommended to rinse the packages for a variety of reasons. It is more hygienic and makes it more pleasant to store the rubbish at home, and makes the work of people sorting rubbish much more pleasant. In addition, the rubbish prepared in this way is more likely to be recycled than the one that wasn’t cleaned beforehand. There are advantages of cleaning the packages before throwing them away, but it is not obligatory and legally regulated which introduces a bit of confusion.

Recycling doesn’t only mean sorting rubbish but also production of energy out of waste. The process is conducted at special plants where biodegradable materials or plastics are converted into electricity or fuels such as methane, methanol or ethanol. Electricity and fuels are obtained in the process of combustion the side effect of which and main concern related to the method is production of carbon dioxide. Bearing in mind the rates of carbon dioxide emission imposed by the European Union, it is easy to understand that producing energy out of waste isn’t again a flawless process solving out the problem of full landfills.

House clearance as an example of good recycling practice

House clearance is a service which helps people manage their rubbish or get rid of the belongings they no longer need. This trend has popped up a few years ago, and it seems to have found a niche in the market, basing on the interest the consumers have in this kind of business. Waste removal companies help clean the house before its sale, support people who don’t have time for cleaning or these who suffer from compulsive hoarder syndrome. The range of the junk they deal with is quite wide, and it includes:

How does it work?

A waste removal company, to be entitled to take care of removing waste from the customer’s property, should be approved by the Environment Agency and have the licence. It is the first thing to check, while choosing a company to clean your house. It is also advisable to check their policy of dealing with waste. The majority of the companies try to minimize the number of items just thrown away, and might want to buy some belongings from you, in order to reuse them later. Items not qualifying for purchase are taken away and handed in to the organizations that deal with them. For this reason it is so beneficial for the environment that we use the service of such companies when getting rid of the household rubbish. They will take care of the rubbish professionally, making sure most of it gets second life. Many companies don’t need to visit your property before estimating the effort and cost of the clearance – the conversation on the phone will be enough, however, if the cleaning process is more demanding and more complicated it might involve someone from the company visiting you. The price differ basing on the amount of rubbish thrown away, the distance between the removal car and the front door, whether there is a lift or stairs, and many more.

We recommend some useful information on our BLOG